The resolution of the present and near future is 4K UHD If you are going to buy a TV over 40 inches, do not think about it: bet on a 4K UHD resolution over any Full HD panels. In fact, from 40 inches this is the predominant resolution and it is possible to buy televisions with this resolution of top brands for just over $600 dollars. Although we still do not have all the bells and whistles from brands such as LG that have already presented models in 8K, that continues to grow at a good pace: to streaming platforms such as Netflix or Amazon Prime, who continue to boost their catalog of series, films and documentaries in 4K and we have to add Blu-ray 4K movies and the growing number of releases of great titles for PlayStation or Xbox.

In addition, thanks to the scaling of 4K UHD TVs it is possible to enjoy the wide 1080 content at very good quality, so the abundance of content in Full HD is no reason to opt for that resolution.

HDR yes, but of what kind

From the hand of the 4K UHD comes HDR (High Dynamic Range) technology that we have already talked about and and we could read more from sites such as Engadget. HDR allows, if the content is compatible, to reproduce a wider dynamic range, so that it recovers more information in dark and bright areas. The result? Some images more natural and similar to what our eyes see in reality. 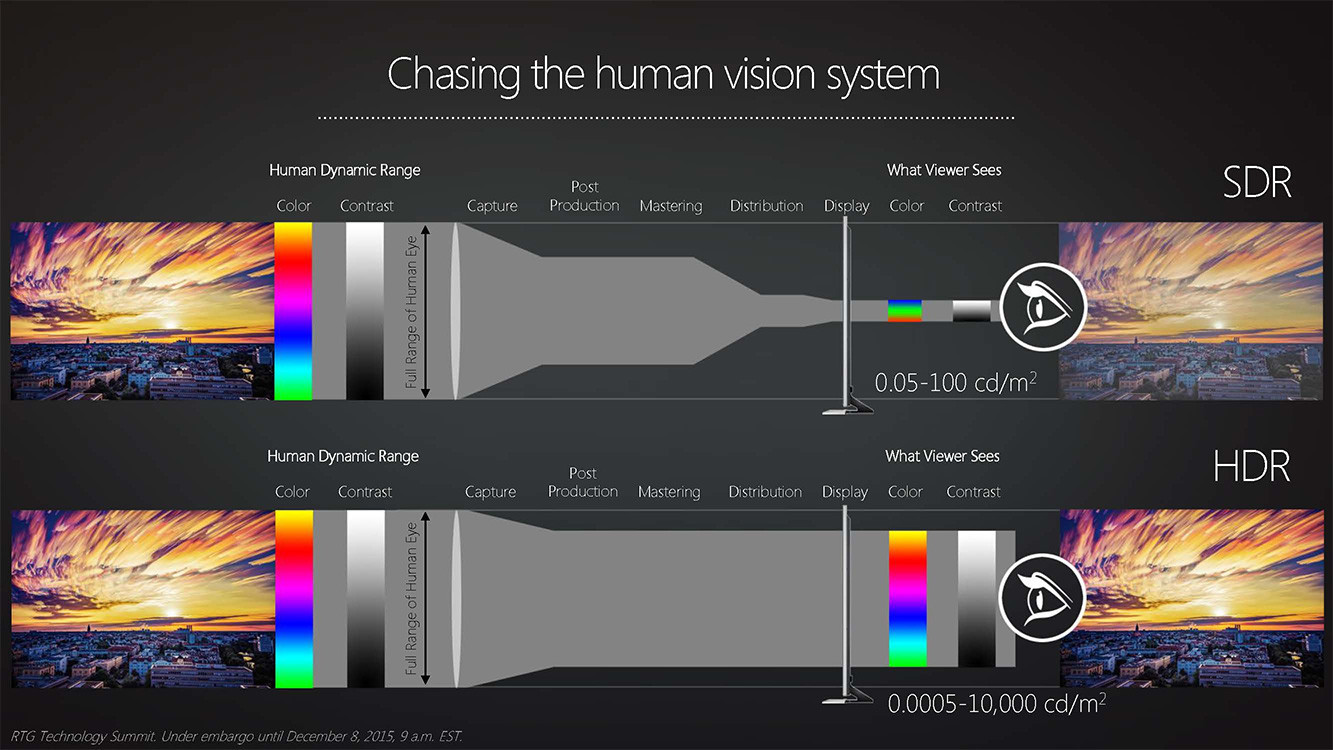 Currently in the market there are several HDR standards competing to prevail, but there are some that we must take into account especially when buying a TV in 2018:

In the market exist two technologies for panels: LCD with LED backlighting (and derivatives such as Samsung’s QLED) and OLED. Each of them is indicated for different publics and uses so it is a matter of your needs. OLED technology (Organic Light-Emitting Diode) is the newest and unlike the LCD, it is able to turn the pixels on and off individually. As a result, blacks are more pure and realistic, the contrast level is better and the colors stand out more. Another advantage is that it offers a perfect image from any point that we watch TV. Its biggest handicap are the retentions and burns, an effect of the use and deterioration of the organic diodes that make it up.

Although OLED displays integrate sophisticated processing systems to minimize it, OLED televisions are discouraged for use as a computer monitor or if the TV is left on for many hours a day (roughly, more than 4-6 hours). OLED screens reign on TVs with large diagonals (from 55 inches), so that below these dimensions there is no discussion. What if I look for a big TV to have it on for many hours? Then your choice must be LCD, the key will be in the FALD or Full Array Local Dimming. Decanting by LED or OLED will be a question of needs, but if you choose LED, the FALD backlight is fundamental.

This distribution is more expensive and complex, but allows a more precise control of the lighting, so that the contrast and native colors are better. If we are concerned that the angle of vision of the LED is less than the OLED, an alternative is the Samsung QLED models, although its price is much higher. Beyond the technology of the panel, an element that has a lot of impact on the quality of the images we see on the television is the image processor and the algorithms used. In this article you can see how processors affect mid-range and high-end TVs from some manufacturers.

Not all HDMI are the same

Although it is taken for granted that the television that we are going to buy has HDMI connections, not all are the same. In fact even in the most premium models we find that all the available jacks, only one corresponds to HDMI 2.0 or later. This standard allows the transport of 2160p signals at 60 Hz. The rest will be HDMI 1.4 sockets, whose signal transfer rate will be 2160p at 30 Hz or less.

Currently the most modern standard on the market is the HDMI 2.0b, with which we ensure support for new HDR technologies, 4K content at 60fps with a bandwidth of 18Gbps and can handle up to 32 audio channels. However, HDMI 2.1 has already been introduced. If we do not want our TV to become obsolete in this sense, it is advisable to acquire a model that has the highest number of HDMI 2.x connections.

In the field of Smart TV there is much to discover. Currently with a Smart TV it is possible to control the device through voice, play, access menus, download applications and services in streaming, configurations … but it is a service on the rise. In the market we mainly find Tizen in Samsung TV, WebOS in LG and Android TV in other manufacturers such as Sony. However, taking into account the youth of the sector and that the average life of a TV exceeds 5-10 years, it is likely that these platforms will become obsolete before we buy another TV. Something that should not be a problem thanks to an external receiver or multimedia center that we can acquire at the time. So the fundamental thing in this section is to make sure we have access to the most outstanding streaming services, such as Netlflix, Prime, HBO or YouTube and that it has a fluid menu. As the interior hardware is more powerful in TVs of medium and high ranges, it is normal to offer better performance.

Both for those users who do not want to invest too much in a TV and for those who do not need the best of the best, there are alternatives in the market with a great value for money. For this budget we can find very interesting options around the 40 inches, LED LCD panel and 4K UHD resolution. Here are some models to look for:

In this price range we find a lot of televisions within the LED LCD technology but with a variety of features. So, we have opted for four differentiated models of different sizes, but also with some curved screen, Ambilight system and original design without neglecting screen quality.

From this price we find large panels with very good image quality thanks to improvement technologies. In addition, it is possible to find QLED TVs, especially in medium ranges and contained sizes.

In this price range we find large screens and there is also room for the best technologies in panels.