Nokia has made a comparison between mapping services of its new Lumia 920 with those available in other two smartphones that are more competitive on the market: the Samsung Galaxy S III and the Apple iPhone 5. The Apple Maps application is the worst of all in this comparative information for not offering public transportation nor does it operate in offline mode.

After the criticism Apple has been receiving in the Maps service in iOS 6 since its introduction, the company Nokia has published a comparative analysis between applications that are offer by the new Apple iPhone, the Galaxy S III and Lumia 920.

According to Nokia on its blog official Conversations by Nokia “maps and location-based apps should be accurate, providing the best quality and be accessible from anywhere basically.” According to Nokia “how nice it is cannot be enough,” referring to the visuals that should not mislead the consumer by the proper functioning of the phone location experience.

Using infographic the Finnish company compares location services provided by both the Lumia 920, with Nokia Maps, the Galaxy S III, with Google Maps, and the iPhone 5, with the Maps application.

If you go to offline mode operation of location service in both phones, the company claims that theirs is the only one with a working application that does not require the user to be connected. Since they can download maps of all countries and positioning access options, search and directions without being online. 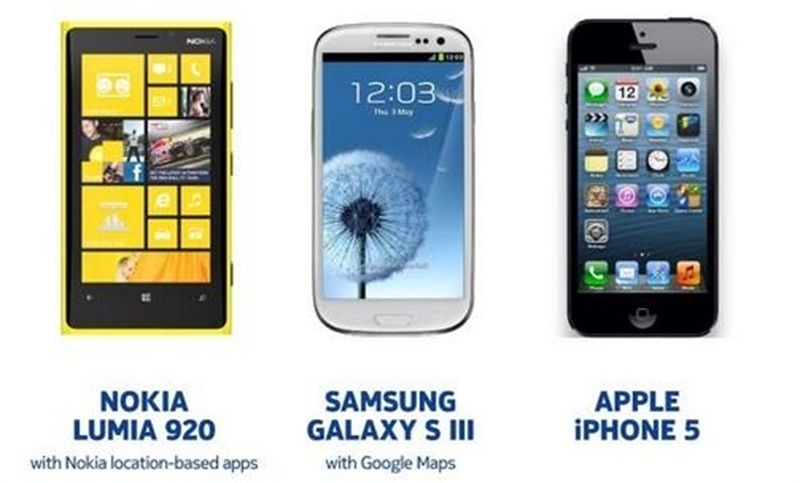 As for the number of countries they cover, Nokia also fares well. According to the Finnish infographics the location app in the Lumia 920 covers more than 110 countries. This is followed by the iPhone 5 using Maps with coverage of 56 countries, thanks to TomTom and, most recently, Google Maps built into the S III covers only a total of 39 countries.

However, the Galaxy S III does compete with the Lumia 920 when it comes to providing information about public transport in a city or urban areas. Both phones provide this service to over 500 regions, while the long-awaited iPhone 5 does not offer this possibility to any user.

Where Cupertino has improved in its new iPhone is that it informs users of traffic, namely from 23 countries. This is a substantial figure but not so much when compared to the 26 countries covered in the Lumia 920-with My Commute-and the 47 countries whose traffic is monitored in the Galaxy S III from Google Now.

Despite the large number of ‘fans‘ the iPhone 5 has, it can be said that it needs improvement in terms of its location service through the integration of Maps. Proof of this is that it neither comes with an orientation service such as the augmented reality in the Lumia 920 or the Google Maps Street View that is available in the latest Galaxy family.

“The suite of location-based applications and services from Nokia in its new Lumia devices put them at a distinct advantage over its competitors in terms of depth, integration of experiences of maps, navigation and transportation these can offer “, according to Canalys senior analyst Tim Shepherd.