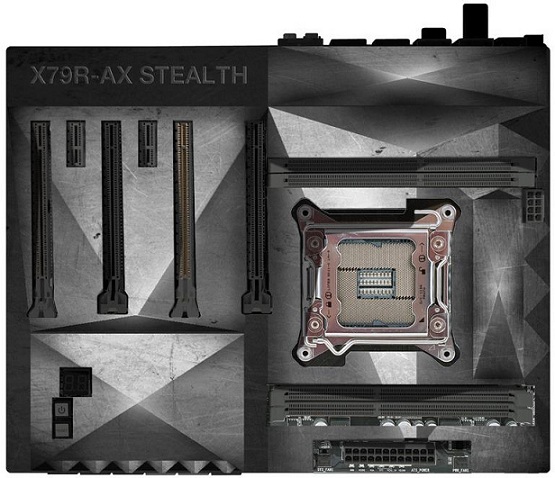 The concept of “Thermal Armour” isn’t really a new one. We’ve only really seen it debut on recent generation ASUS Sabertooth motherboards with the pure intentions being to lower temperatures of motherboard components. It also offers protection for motherboard components from dust build up and a marmite-like aesthetic that you’ll either love or hate.

The ECS equivalent to ASUS’ Thermal Armour could easily confuse brands a bit so we’ll just call the ECS version a Stealth shroud. The shroud design is similar to what we’ve seen before except the shroud is not perforated but features venting for the edges as well as open gaps for crucial inputs like power, memory and PCI express lanes.

The rest of the motherboard, the Stealth Shroud aside, shares almost an identical feature set with ECS’ Black Series motherboards. Based on the X79 chipset this motherboard is targeting the enthusiast crowd so expect pricing to reflect that. No specific launch date has been set in stone yet but expect it out as soon as possible so ECS can capture some more of the X79 market before sales start to decline in the run up to Haswell and Ivy Bridge-E.

When Surface was introduced by Microsoft several weeks ago, it generated great uncertainty about the potential cost the tablet would have to the end consumer. Rumors were swift, and even its price was speculated with prices ranging between $599 and $1,000.

Other “less pessimists”, taking into account the words of Steve Ballmer during that time, put a price much closer to $300. Very similar to other ARM tablets available in the market. 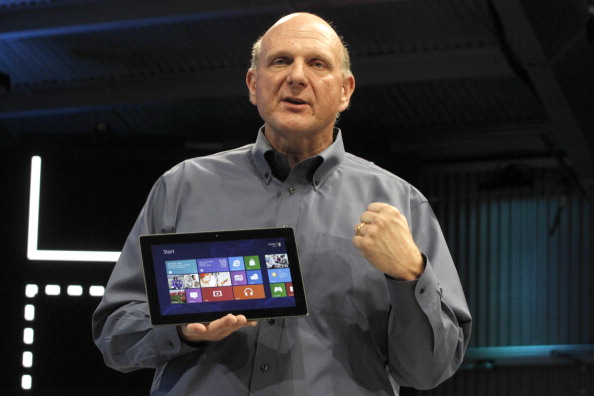 Today, just over two months from the official launch comes new strong rumors, this time, much more optimistic for consumers, for now the talk is about a price that would be just below $200.

If this information is confirmed (although we will have to wait some time yet), Microsoft would be sacrificing some of their profits, and even if they do not know yet the exact product manufacturing costs, the company could be losing money on every sale. All this as part of the strategy to compete directly with the newly introduced Google Nexus 7 and Fire Amazon Kindle.

From my point of view, to prove this, Microsoft’s strategy is not far-fetched, they have a product that, at least initially, looks pretty good, with excellent performance and sophisticated design that, at that price, would sell like hotcakes. What almost surely would mark a very successful debut for Windows 8 RT and the front door entrance of Microsoft into the world of tablets.

Also, it has drawn much attention to the level of integration one can have with Windows 8, being present on desktops and tablets, together with the release of Windows Phone 8 in a new line of smartphones. From the point that Windows is the most widely used operating system, many consumers may opt for Surface, beyond price, for reasons of convenience. Since we can enjoy a complete experience, something similar to what Apple has achieved with their products. Ultimately, the price of Surface will impact directly on the success of Microsoft in the coming months, so it will have to think very well its decisions. Meanwhile, we have to wait until October 26, to have a clearer idea of what might happen. 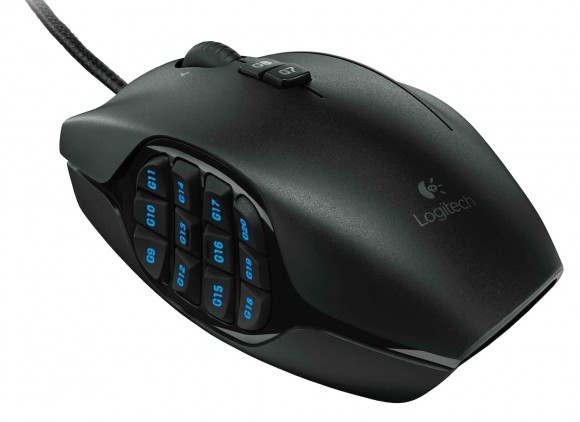 With three default profiles – two for MMOs and one for general gaming – it is set up for optimal use right out of the box, no drivers required. In addition, it has a G-Shift function that easily doubles the number of actions you can perform with any button, giving you complete control in your favorite MMOs. As with all of our G-Series products, the keys are programmable so you can create your own commands, store them in the mouse’s onboard memory, and access them all with one touch. Plus, its sculpted shape comfortably supports your hand through long gaming sessions.

For additional personalization, the thumb panel’s RGB illumination is fully customizable with more than 16 million possible color combinations that you can use to easily identify the active on-board profile. The lighting can be set to glow continuously, pulse on and off, continuously cycle, or dim after a user-determined period of inactivity.

Pricing and Availability
The Logitech G600 MMO Gaming Mouse is expected to be available in the U.S. and Europe beginning in July 2012, for a suggested retail price of $ 79.99.

ECS will be present at this year’s Computex event. Their display will consist of an ECS Ultrabook, ECS All-In-One PCs featuring Windows 8 as well as showcasing their new Nonstop technology in action on their latest range of motherboards. ECS will be at the Nangang Exhibition Hall 4F, Booth No. L118 and you can read more about their Computex display below:

ECS will display its series of motherboards of using the latest Intel and AMD platforms and a wide range of Thin Mini-ITX motherboards at Computex 2012. ECS will also introduce its latest Nonstop Technology for its motherboards which improve upon the long-term stability of ECS motherboards as well as the ECS GeForce GTX 680, a top choice of high-end graphics cards.

The ECS Ultrabook UT40 Series, which will be revealed at Computex, supports Intel 3rd Generation Processors, Ivy Bridge. The UT40 series offers lightning fast boot-up – only 7 seconds- and data transmission speeds thanks to their SSD hard drives and USB 3.0 interfaces. Additionally, the UT40 series ultrabooks, weighing only 1.9kg and with a thickness of 21mm, feature 14-inch displays and a resolution of 1366 × 768.

ECS Wi-Bridge is a portable wireless display adapter, which is lightweight and has a small footprint to save more space in your living room or on your office desk. ECS Wi-Bridge successfully breaks the wireless limitation and connects your PC or NB with an HDMI output display. It is both compliant with iOS and Android systems. You can access your content by a remote controller bundled in the package. ECS Wi-Bridge is the best wireless solution to break the boundary between your PC and the couch. 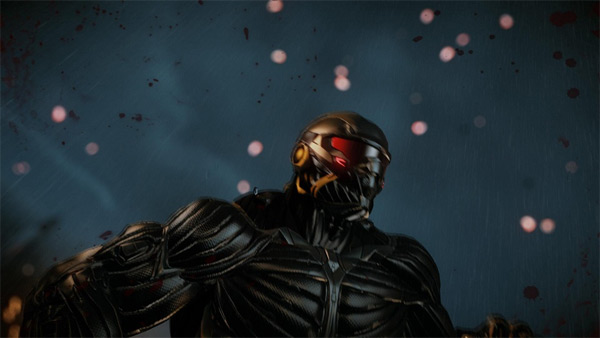 Crysis 3 is confirmed and although you’ll have to wait another year to be able to play it, Crytek began marketing it, and even accepting pre-orders.

On Friday, it posted Crysis 3 Debut Trailer (the very first trailer), which reveals quite a bit of action going on, in the game, including the intriguing crossbow weapon.

The trailer reveals a sci-fi post-apocalyptic setting in which a city is overrun by vegetation. The baddies appear to have a force-field around the city now. The teaser is just 15 seconds long. A (probably longer) gameplay trailer is slated for Tuesday, the 24th.