The latest talk of town now at days seems to be about Ray Tracing. Undoubtedly soon after the release of the new RTX series video cards from NVIDIA. This technology will undoubtedly change the world of videogames, but many will be asking what it is and what its going to mean for technology.

Ray Tracing (RT from now on) is a technique based on an algorithm created by Arthur Appel called Ray Casting (1968) through algorithms to determine visible surfaces.
we can find more here.

Thanks to RT, 3D graphics can be rendered with complex lighting models simulating the physical behavior of light. Until now this process could not be done in real time, so it had to be processed first and later rendered to get said behavior of the light. This conventional 3D rendering process has so far used a process called rasterization, which uses objects created from a mesh of triangles or polygons to represent a 3D model of an object. This “rendering pipeline” then converts each triangle of the 3D models into pixels on a 2D screen, so that they can then be processed or “shaded” before the final display on the screen.

Ten years ago OptiX introduced the programmable shader model for ray tracing (OptiX GPU Ray Tracing). NVIDIA has continued to invest in hardware, software and algorithms to accelerate that programming model in its GPUs and it is now when they have presented it finished together with its RTX series. The OptiX API is an application framework that leverages RTX technology to achieve optimal ray tracing performance on the GPU. It provides a simple, recursive and flexible pipeline to accelerate the ray tracing algorithms. In addition, the post-processing API includes an AI-accelerated noise eliminator, which also leverages RTX technology. From movies and games to scientific design and visualization, OptiX has been successfully implemented in a wide range of commercial applications. These applications range from software visualization to scientific visualization (including Gordon Bell Award finalists), defense applications, audio synthesis and computer light maps for games.

Vulkan is a multiplatform API for the development of applications with 3D graphics. It was announced for the first time in the GDC 2015 by the Khronos Group. Initially, it was presented by Khronos as “the next generation OpenGL initiative”, but then the name was discarded, leaving Vulkan as definitive. Vulkan is based on Mantle, another API of AMD, whose code was assigned to Khronos with the intention of generating an open standard similar to OpenGL, but low level. Unlike the Microsoft API, Vulkan can work on a wide range of platforms, including Windows 7, Windows 8, Windows 10, Android and Linux. NVIDIA is developing a ray tracking extension for the multiplatform computing and graphics API of Vulkan. It will be available soon according to NVIDIA, as this extension will allow Vulkan developers to access the full power of the RTX graphics. NVIDIA is also contributing to the design of this extension to the Khronos group as a contribution to potentially carry out a ray tracking capability among suppliers to the Vulkan standard.

So what games will support Ray Tracing?

It is something yet to be seen, at the moment there is not even a benchmark that gives full support to ray tracing and the closest thing to knowing a complete list of future titles is what NVIDIA showed: 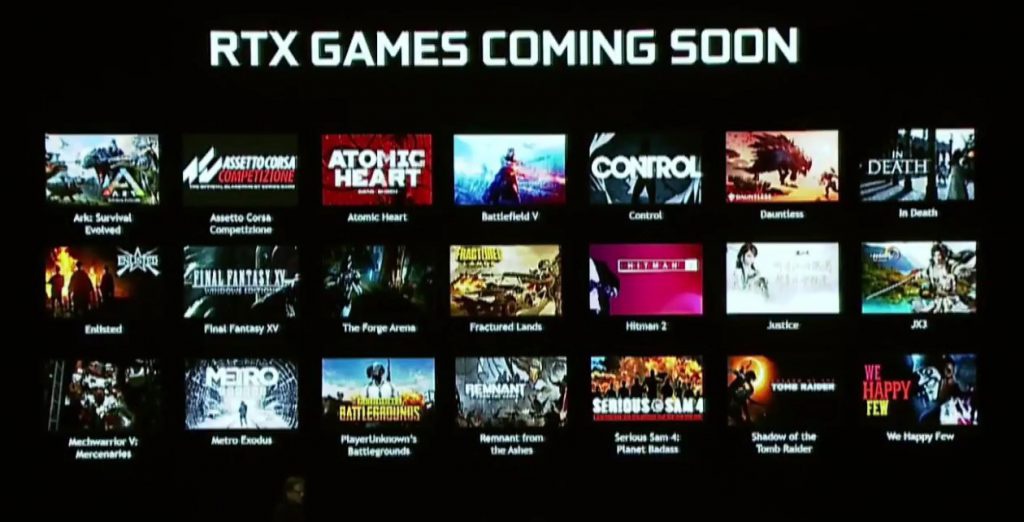 This does not mean that those 21 games support Ray Tracing, but that they can also make use of artificial intelligence. Of all of them some have confirmed support such as: Asset Corsa Competizione, Atomic Heart, Battlefield V, Control, Enlisted, Justice, JX3, Mechwarrior V: Mercenaries, Exodus Metro, Shadow of the Tomb Raider and Project DH. The only problem with this technology is the high consumption of resources, since it seems that we will have to use specific units to increase it, just as NVIDIA has designed its Turing architecture. Seen the seen many are skeptical with Vulkan and DXR, since NVIDIA has shown empirically that without such units (RT Cores) the performance is reduced too much. To see the improvements of this technology and to finalize this article that better than seeing it in action in 3 of the main AAA titles that are going to come out or have already come to the market:

Shadow of the tomb raider