Let’s continue breaking down the news of today. The RX 7900 XTX, AMD’s flagship video card, comes with 24GB of memory. The slightly less ambitious Radeon RX 7900 XT has 20 GB of memory. At the performance level, the company claims that the 7900 XTX will be up to 1.7 times faster than the RX 6950 XT in 4K resolution. The average consumption of this card, meanwhile, is only 355 watts, considerably less than the 450 watts of the NVIDIA GeForce RTX 4090.

The RX 7900 XT will have an average consumption of 300 watts. Both cards will require 2 x 8-pin PCIe power connectors. AMD has also updated its Ray Accelerators, the equivalents of Nvidia’s RT Cores. Its second generation accelerators have 1.5 times better capacity than the first generation RDNA 2. The company has also announced that it has decided to decouple the clock speeds. What does this mean? Instead of running the entire Graphics Core Die (GCD) at the same speed, the shaders will run at 2.3 GHz while the front-end will be clocked at 2.5 GHz.

In addition, in early 2023 AMD will also launch HYPR-RX, its overclocking software that will allow enthusiasts to set certain settings to increase frame rates and reduce latency. The well-known AMD Adrenalin software,that will continue to integrate all software functions, performance reports, driver updates and game statistics. 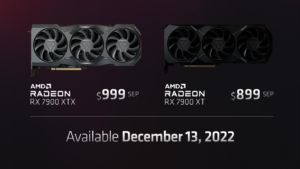