The event organized by Motorola and Verizon happened yesterday evening accompanied by live music and words of Eric Schmidt, CEO of Google. There were three devices who will be Motorola’s bid to gain market share this end year. 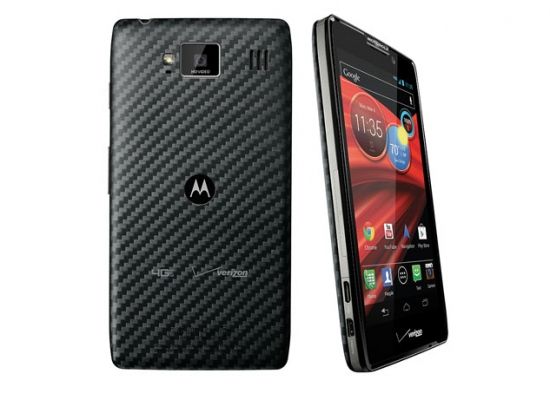 This is the new Droid Razr family, a union of brands that could end up being called Milestone Razr or Razr just like their predecessors. In summary, the three devices are an family that are in an middle area in terms of power, especially in software, screen resolution, and importantly, size, appearance and price.

The star is the Droid Razr HD, which is in line with the original Razr, but with a screen with 78% greater density of pixels and a 2530mAh battery, which will allow you to overcome a day of continuous use. The processor is 1.2 Mhz dual core and has 1GB of RAM, almost the same as the previous version. As for the camera, maintains the 8 megapixel rear and 1.3 megapixel front camera with LED flash. Of course, you will have NFC, Gorilla Glass, water repellent layer.

Second is the Droid Razr Maxx HD, which is basically the HD Razr with a bigger battery. Reaches 3300 mAh, allowing you to survive a day and a half or more, depending on usage patterns. Ultimately, this may be one of the most attractive devices of the brand, because it meets the standard features of this generation of smartphones, but with a standard battery.

Finally we have the Droid Razr M, who is the younger brother of the family, with a 4.3 inch screen of 540 x 960 px, less memory, same camera as the later but with a HD VGA at front. This is a mid-range device that takes some aspects of the high-end at a spectacular price: only $99.

The three smartphones presented run Android 4.0 Ice Cream Sandwich from the factory, but Jelly Bean will be updated later this year.

It also highlights the physical appearance of the new Razr family. They retain the rectangular shape with rounded edges, but the back is more aesthetic than the previous generation, set to be completely covered by Kevlar fibers, including the outline of the camera.

Apparently the improvements over the previous Razr might not seem significant, although, the new Razr is not full of magical and innovative features, they are an excellent choice for those looking for a smartphone that offers the latest in Android with excellent battery and endurance.

You can learn more about this release in the press release from Motorola.