AMD RDNA 3 is expected to be AMD’s next generation of GPU architecture, replacing the current RDNA 2 architecture and competing with the upcoming Ada Lovelave that will power nvidia RTX 4000 series GPUs.

The new line of AMD Radeon RX 7000 series graphics cards will be based on the RDNA 3 architecture, which will use TSMC’s 5nm node according to an AMD engineer on LinkedIn (via Overclock3D).
There’s not much information available about the RDNA 3 architecture at the moment, but AMD has confirmed that it plans to release its next generation of graphics cards before the end of this year.

Keep scrolling down to get everything you need to know about AMD RDNA 3 and keep this page marked as a favorite, as we’ll update this article as more details are released.

According to reports, this GPU will boast 20GB of GDDR6 VRAM. This is 4 GB more than its predecessor, the Radeon RX 6900 XT. Now, the most relevant detail is unknown, which is the speed of the memory and what interface it is attached to. It is speculated that at a 320-bit memory interface, taking the GDDR6 memory chip used in the RDNA 2 architecture, which is 18 Gbps, we would speak of a bandwidth of 720 GB/s, 144 GB/s more compared to the Radeon RX 6950 XT.

Finally, it is speculated that a future Radeon RX 7950 XT could significantly raise the bar and it will not be a mere overclocked version as it happened with the Radeon RX 6950 XT, since it could arrive with 24 GB of memory along with a memory interface of 384 bits, although these are only speculations.

Finally, we hear that this graphics card will use a Navi 31 graphics chip manufactured by TSMC at a 5nm manufacturing process. This chip would offer a configuration of 10,752 Stream Processors, 80 MB of Infinity Cache, and would lead to a rumored total consumption of around 330W of power.

On the other hand, the flagship model, the Radeon RX 7950 XT, would now have access to the full chip. This translates into more power thanks to having access to a total of 12,288 Stream Processors. In this configuration, in addition to offering 24 GB of memory, it would be faster and could be at 20 Gbps, which would lead to a bandwidth of 960 GB/s, together with the use of 192 MB of Infinity Cache. This would make its power consumption around 420W.

What we officially know about the AMD RDNA 3 architecture

Officially, AMD promises another 50 percent performance boost. In other words, the same thing that was experienced with the jump from the RDNA architecture to RDNA 2. In essence, we are talking about 50% more performance per watt consumed, to which we must add the new chiplet design. Thanks to this they can almost triple the number of cores currently available in the Radeon RX 6950 XT and RX 6900 XT (5,120 SPs). Obviously, this also implies an increase in energy consumption, so if the consumption is finally set at 420W, we are talking about consuming 120W more compared to its predecessor.

On the other hand, it must be remembered that RDNA 3 graphics (chiplet) will coexist with RDNA 2 graphics (monolithic) in the same Radeon RX 7000 series. 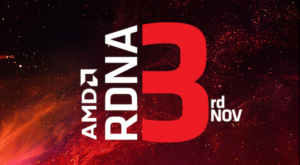