How to get infinite turbo in Sonic Frontiers

Over the years the video game industry has managed to have quite a few mascots, although the term may be a bit outdated by now. Both Sonic and Mario have become iconic among gamers.

However things are different today, but what has not changed, and also not at all, is the public’s devotion to both characters. It may be that Mario is better preserved over time, basically because who doesn’t love Mario or at least has heard of him, but with Sonic we cannot say the same. For example, Sonic Boom: Shattered Glass can be considered one of the worst Nintendo 3DS games.

Now Sonic Frontiers has arrived, this is a video game about which many people had certain reservations, but which in the end has turned out to be a good title, this despite the fact that many do not want to admit it, some even resorting to review bombing. One thing about this title is the turbo mode of Sonic that is limited by a resistance bar, something that may be contrary to the hedgehog’s history.

This is how you get infinite turbo in Sonic Frontiers

Before starting you have to know that there is a requirement to be able to get the infinite turbo in this game. In order to get the Infinite Boost ability in Sonic Frontiers, players will need the cycloop ability. And to activate the Infinite Boost just use Cyloop and draw an infinity symbol (which looks like 8) on the ground and that will do the trick. However, the boost only lasts for a few minutes, but on a good note, it does not affect the character’s stamina. If you haven’t unlocked the Cyloop ability, you can do so by spending 1 skill point in the skill tree. For more details, check out this guide on how to cyloop in-game.

If you are still not satisfied with the speed that Infinite Boost provides, then there is another way that will surely surprise you. In Sonic Frontiers, players can even speed up the power of Infinite Boost and create an Infinite Power Up. If you don’t know the process to do that, follow the steps below.

How to get infinite power boost?

To get Infinite Power Boost you will need to use Cyloop to create a circle until the rings max out. This process may take a while, but it will give you the maximum speed you were looking for. Make sure you don’t lose the rings by crashing or dealing damage to an enemy. That’s because by doing so you will lose the Infinite Power Boost ability. Most of the players are unaware of this ability and only use the Cyloop circle to farm some resources, but now you know.

That pretty much sums up everything about how you get Infinite Boost and Infinite Power Boost in Sonic Frontiers. 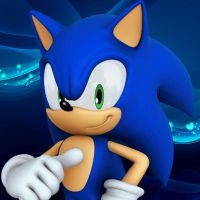