For now it has only been presented four models of custom graphics cards including two Tahiti XT cores on the same PCB and all belonging to the same company, but sold under different brand names. We talked about PowerColor models, and Club3D and VTX3D. HIS is another manufacturer that also put out their version with two Tahiti XT cores to the market under the name HIS Radeon HD 7970 X2.

Although it does not seem that AMD will not possible launch its reference version equipped with two GPUs, different manufacturers are slowly releasing their models. As mentioned before, there are now only four DualGPU cards out there equipped with two Tahiti XT graphics cores, and only the Devil13 version of PowerColor, the remaining three are actually the same card but with different names.

In June, HIS showed the first details of its graphics card the HIS Radeon HD 7970 X2, a model that will also be equipped with two Tahiti XT cores under one PCB and will be an alternative to the other cards. The same that happens with other DualGPU models, needs a three 8-pin connectors PCI-E for power. Its cooling design is based on a large aluminum heat sink with several copper heatpipes with two fans to generate smooth air flow.

On the back it bears a metal backplate that helps the cooling of components located on the PCB of the card. Operating frequencies are at 1050MHz for the GPU and its effective 6.000MHZ 6GB GDDR5 memory, 3GB per core. Looking at the competition, the version of HIS is the best at leading operating frequencies, since the HD 7990 Devil13 runs at 925Mhz/1.0Ghz  while PowerColor HD 7990, and Club3D VTX3D operate at 900Mhz/925Mhz. 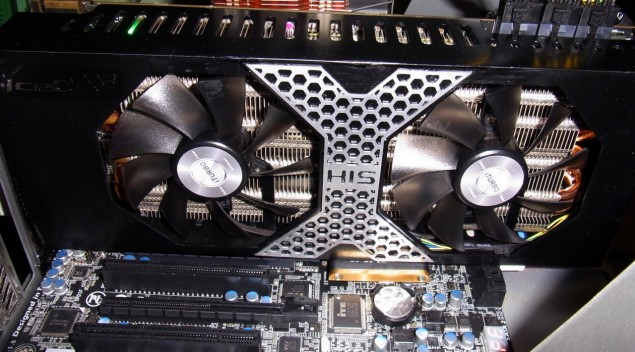 Video outputs are also different from other HD 7990, in this case incorporates a DVI and four mini DisplayPorts. We assume that other manufacturers such as Asus, Gigabyte or Sapphire will also release a version with two Tahiti XT cores, but so far nothing is known about them, so the only manufacturers that now have a version with two Tahiti XT cores are HIS, PowerColor, and Club3D VTX3D