The manufacturer Gigabyte has released the Gigabyte Z77X-UP7 motherboard, a model based on the Intel Z77 Express chipset which is positioned as the current top model for LGA1155 socket. This is a motherboard aimed at demanding users, but especially for overclock lovers. Among its most important features, we find a 32-phase Power design, so its potential to overclock is assured. It is not a motherboard that has come out of nowhere, it took months waiting to see its details, although many of them we have discussed before. 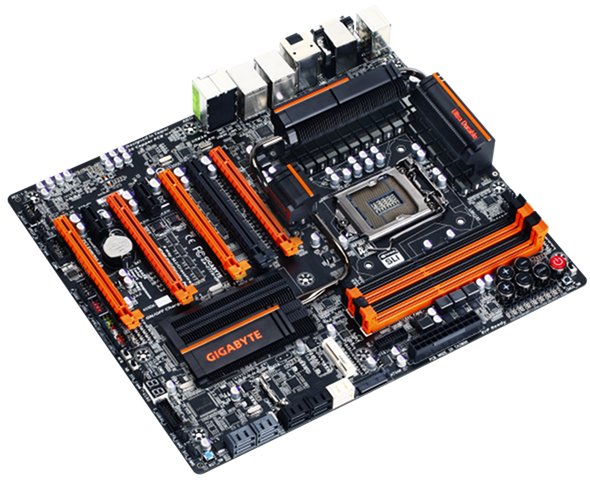 Just a few days ago, Gigabyte achieved a record breaking overclock with its processor Intel Core i7-3770K and with the same motherboard. Renowned overclocker  HiCookie reached 7102Mhz and did need to use a voltage of 1.968V. Logically the cooling system used was liquid nitrogen, for now we can get an idea of what the Gigabyte Z77X-UP7 can offer.

the PCB of the Gigabyte Z77X-UP7 is based on the color black with orange accents, which looks really good and gives this motherboard a striking look. One of its strengths is the design with 32 power phases (32 +2 +3), so we have 32 phases for the processor, 3 phase for the integrated graphics and the remaining two for RAM.

Another of its good properties is the use of a technology called UltraDurable 5, for which the manufacturer ensures that all components used in the PCB of the motherboard are of high quality, as is the case of the VRM IR3550 rectifier. In fact, the MOSFETs that are equipped are carrying about 30 º C cooler than those commonly used, which is achieved by improved energy efficiency and enhanced stability. The cooling system is based on a total of four coolers to cool the chipset and VRM, such heatsinks are joined by a heatpipe to maintain controlled temperatures.

As for internal connections, the Z77X-UP7 has five PCI-Express 3.0 x16 with support for configurations MultiGPU 4-Way SLI or CrossFireX, two PCI-Express x1, mSATA port, four slots for RAM DDR3, six SATA 6Gb four SATA 3Gb/ s. It also has buttons to overclock directly from the motherboard, something that most overclock fans appreciate. 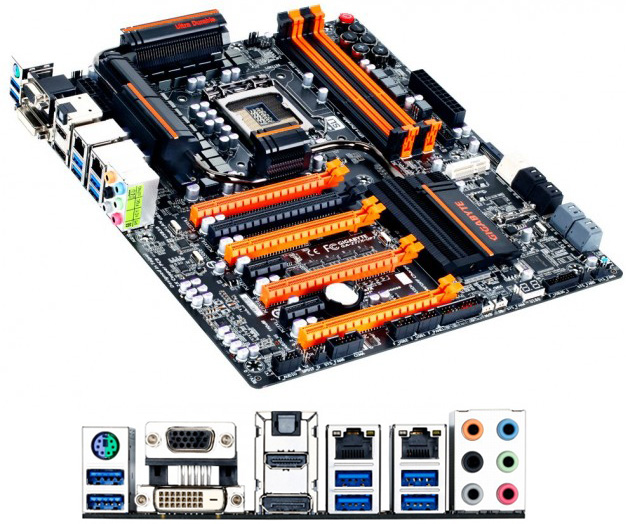 At the back panel it has six USB 3.0 combo port PS/2, eSATA, HDMI, DVI, D-Sub15, dual Gigabit Ethernet connector and audio connectors. Moreover also carries WiFi and Bluetooth 4.0, so you’re pretty well equipped. We still do not know the price tag it will carry, but we do not view this board with these specifications to cost less than $300.