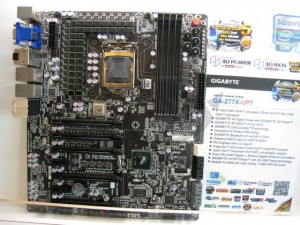 Gigabyte has just introduced its new Z77X-UDP7 motherboard which has no less than 32 power phases, which has not been seen to date on a motherboard like this, and that will become their new flagship without a doubt. It features a stunning design and is one of the first motherboards to feature Ultra Durable 5 technoly and will also feature the new rectifier VRM IR3550 .

The 32 power phases design along with the new IR3550 rectifiers alone cost more than a simple motherboard, so you can get an idea what will be the final price of it, that it will not be cheap obviously, and the segment to which this kind of motherboards are intended : Great overclockers and users who like high-level exclusive products.

These developments allow for greater efficiency, allowing it to include the new 3 rd generation processors based on Intel Core, so that owners of the new Ivy Bridge with multiplier unlocked ( K -Series) will take them to the limit with this new motherboard. The announcement took place at the Computex 2012 which is being held this year in Taipei ( Taiwan ) these days. 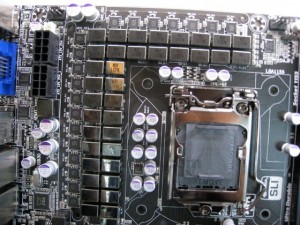 As its name reveals, this motherboard has an Intel Z77 chipset with what is a motherboard for socket LGA 1155 from Intel, its PCB incorporates Ultra Durable 5 technology which allows high efficiency and avoids temperature problems, and between a multitude of features to be highlighted  includes Bluetooth connectivity has 4.0 , slot mSATA SSD drive In addition to 6 SATA III ports and WIN 4 SATA II, has 5 PCI-e 3.0 with possibility for multi-GPU configurations in both Crossfire and SLI in addition to also have a PCI slot -e x1 Traditional, Dual Gigabit LAN and audio Realtek ALC898 .

On the availability and price is still no information, but is expected to be pretty but quite expensive and not suitable for most budgets.