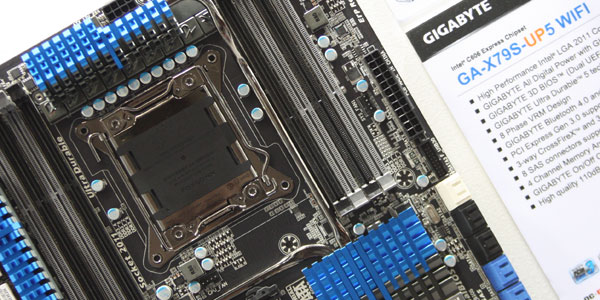 Computex 2012: As we have seen around Computex, Thunderbolt is one of the buzz words of the show with many manufacturers to show their offerings featuring the new interface on the PC platform. Gigabyte naturally wants to show their hand to the table and have a large spectrum of boards on show, a number of which include Thunderbolt.

Starting with the AMD side of the catalogue, the F2A85X-UP4 is not one of the Thunderbolt hosts but it still is key in the shape of things to come. Supporting the new FM2 A-series APUs from AMD, the board also features AMD Radeon 7000 series integrated into the CPU, support for dual-channel 2400MHz DDR3, 6+2 phase digital VRM, Gigabytes patent pending 3D BIOS, Lucid Virtu technology, eight SATA 3 headers and six USB 3.0 ports. 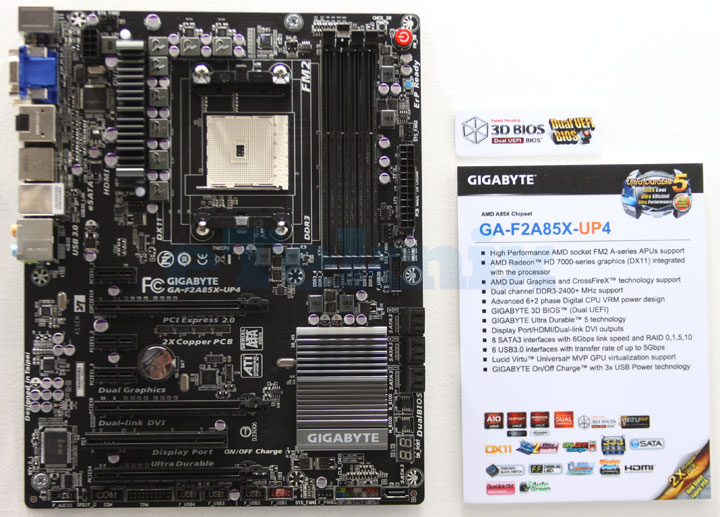 Moving over to the Intel side of the wall and where we see many more boards on display, we start by taking a look at the X79 based offerings. When looking at the model numbers the first thing you will notice os the key letter change to the end of each model. Previously, all board have be labelled with UD*, but now we find that Gigabyte has introduced the UP (Ultra Performance) range of boards. The X79-UP4 supports socket LGA 2011 core i7 processors and features All digital power with Gigabyte’s patent pending 3D power, 3D BIOS (Dual UEFI) with Ultra Durable 5 technology. 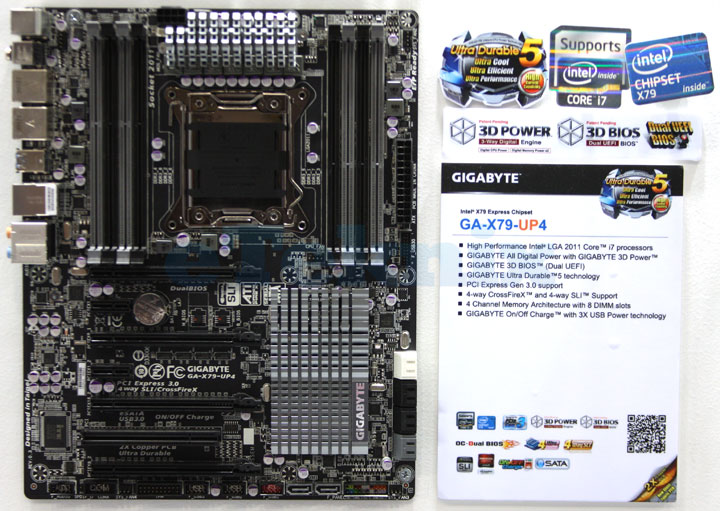 One up from the UD4 we also find on show the Z79S-UD5 WIFI. Over the UD4 the UD5 WIFI features Gigabyte Bluetooth v4.0 and Wi-Fi, 8 SAS connectors, and high quality 110dB SNR HD Audio. 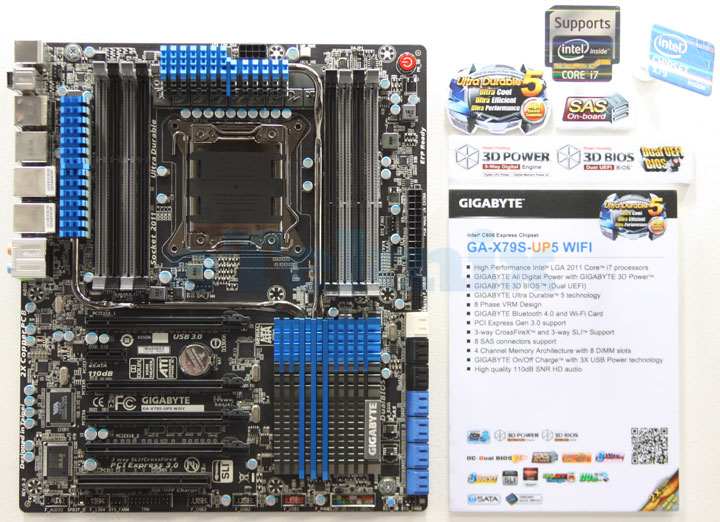 Moving on from the X79 chipset we come onto the recent Z77 chipset. We’ve seen at eTeknix a few of the UD titled boards, but likewise with the X79 boards, we see the new board here with the UP title in their name. The Z77 boards below all support the latest 3rd Generation Ivy Bridge CPUs with Gigabyte’s patent pending 3D Power & 3D BIOS, built on their latest Ultra Durable 5 boards. Other features on the UP4 TH include Thunderbolt support, onboard mSATA, Lucid Virtu MVP support, Gigabyte ON/OFF charge with 3x power technology and 108dB SNR HD Audio. 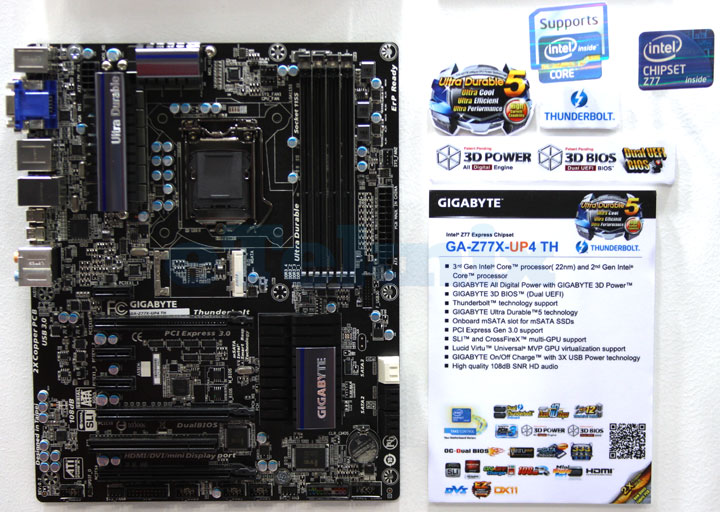 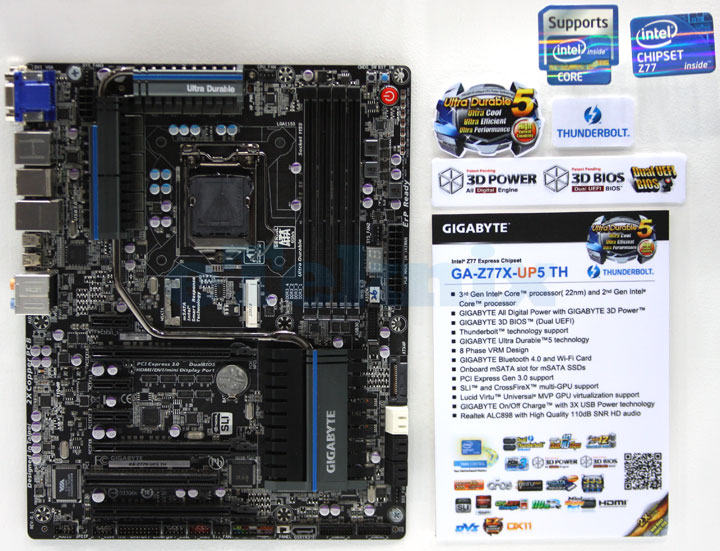 Topping off the lineup is the always impressive UP7. Over the over two boards, we do primarily not the lack of Thunderbolt support, but what we do find instead is an innovative 32 phase VRM design and also a lack of heatsinks over the VRM area. Other spec increases include 4 way SLI and CrossFireX multi-GPU support and Dual LAN (Intel and Atheros gigabit controllers). 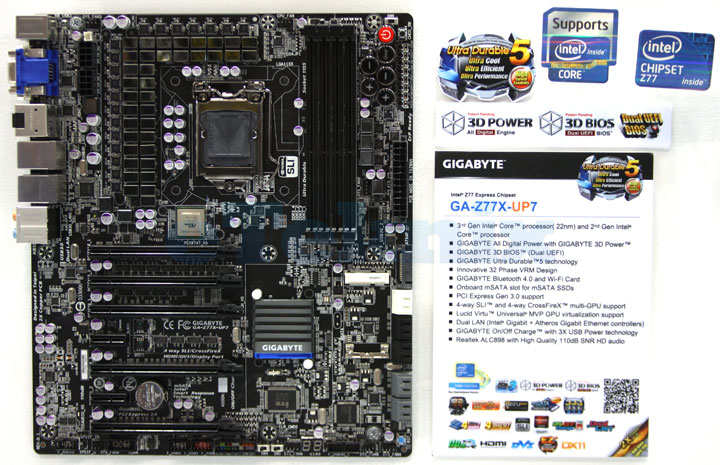 After looking at all of these new offerings, Gigabyte really do seem to have a strong hand with the latest in motherboard design and innovation, and we at eTeknix look forward to taking a closer look at these boards when they become available for review hopefully in the near future to see how they perform.