Call of Duty Modern Warfare 2 has already been released on the market today for Xbox and PlayStation 5 consoles, along with the PC version. But before making the decision to buy it, what better way than to see a performance comparison between consoles and PC. We anticipate that the performance of Modern Warfare 2 on consoles is quite good, reaching up to 120 FPS in campaign mode.

The Call of Duty franchise has been around for almost two decades now. But it was not until Call of Duty 4: Modern Warfare in 2008, when the saga of shooters catapulted its success. But perhaps more interesting is the Call of Duty: Modern Warfare 2 saga, because despite being released in 2009, when these games were not so popular, the title managed to achieve more than 25 million sales. That means that it sold even more than Call of Duty: WWII which was released much later, in 2017. Thus, Modern Warfare 2 is a very important title for Activision and a high point for the series. For this reason, today, October 28, the long-awaited remake of Modern Warfare 2 has been released, for consoles and PC, which brings us some good and bad news.

Call of Duty: Modern Warfare 2 performance on consoles and PC

Starting with the good news, it must be said that Modern Warfare 2 works quite well on consoles and PC, so we now turn to analyze its performance. Thus we have the game running on the PS5, Xbox Series X and Xbox Series S consoles, along with the game on PC to see the comparisons. Thanks to AnalystDeBits on YouTube we can already see how much difference there is between consoles and PC, in terms of FPS and image quality. It must be said that the game is not the shooter with the most realistic graphics today, but it offers great performance on all platforms. Starting with the next gen consoles, the PS5 and Xbox Series X manage to run the game at a stable 60 FPS at 4K (2160P) resolution, albeit using time-scaling technology across all resolutions.

At the same 4K resolution on PC, you can get over 60 FPS with an NVIDIA RTX 3060 Ti. When we go down to 1440P, the performance goes up, but it becomes more unstable, since the FPS already start to vary on the PS5, achieving between 105 and 110 frames per second. Instead, the Xbox Series X achieves better results since it gets a constant 120 FPS in most of the time. Finally, we have the Xbox Series S that achieves 60 FPS in 1440P, which is not bad at all and increases the figure to 90 FPS with a 1080P resolution. To give us an idea, on PC an RTX 3050 achieves between 50 and 65 FPS at 1440P without DLSS with ultra graphics.

The fact that physical game discs are becoming less and less ‘useful’ as the years go by is a reality that we must accept. Before, we could buy a video game and play it completely offline, without needing updates or patches. Perhaps it is the nostalgic vein, but we consider that at that time, games in physical format fulfilled their main objective, beyond being collector’s items. And it is that, although many users buy the physical games to have the box, discs, manuals (something that has disappeared over the years) or figures in the case of a special edition, there are many players who look for this format for another reason.

This is to avoid having to download the huge amount of GB that games occupy. We may think that it is silly if we have a great unlimited Internet speed. Unfortunately, however, there are many users who do not have this luxury, their Internet connection is very slow or they even have limited data when downloading. Thus, avoiding downloading the more than 100 GB that Call of Duty: Modern Warfare 2 install by choosing to buy it physically seemed like an option. In fact, today’s disks are capable of storing tens of GB, but this is not the case, since the one for Call of Duty: Modern Warfare 2 only occupies 72.23 MB.

This fudge of including so little data in the physical copy of Modern Warfare 2 will force us to download 150 GB if we want to play on PlayStation 5. Come on, having the discs for this game makes no difference to not having them, and unless you like collecting the box then there are no other advantages. 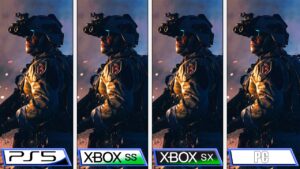