Bandai Namco once rejected the proposal of a 2D version of Dark Souls 3, with pixel art graphics and Metroidvania-style map layout, which was presented to it six years ago.

This interesting bit of news was revealed by the Austrian designer Thomas Feichtmeir, who published an image of the game showing a fight with one of the most striking bosses in Dark Souls 3. A confidentiality agreement signed with the Japanese publisher prevented Feichtmeir from revealing the project to the public until today.

Interestingly, Feichtmeir ended up working on Blasphemous, a game with the same characteristics as the 2D prototype of Dark Souls 3 that was presented to Bandai Namco.

The artist also revealed that the artwork was ‘created in a style that would have been workable under Metroidvanias average budget estimates at that time’.

A Dark Souls 3 – 2D pixelart metroidvania was pitched to Bandai Namco ~6 years ago.
This is now finally out of NDA, so enjoy the visuals created back then. pic.twitter.com/Dt5BDasWbU 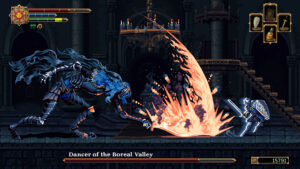