During this week, the IDF 2013 focus was on Intel whom unveiled its new product line looking at the transition to mobiles. However, also AMD is looking to make headlines with its embedded product roadmap for 2014, a market that is gaining interest by the major players in semiconductors. Of the most remarkable, it may be noted that AMD has become the first to offer solutions for both ARM and x86 applications for ultra -low power, high performance, as well as the first AMD Radeon GPU for embedded applications. 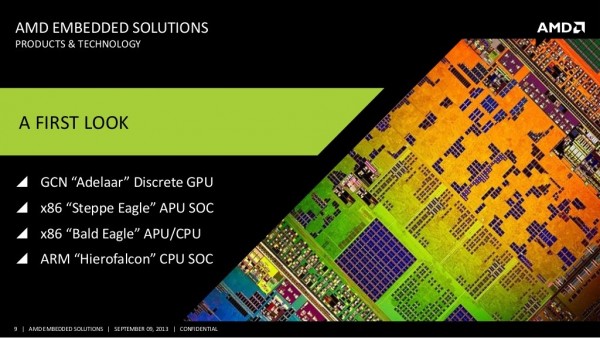 AMD has several reasons to focus on the embedded market. According to a report from the firm VDC Rresearch, the market for traditional CPUs and intelligent systems will grow by 36 % increasing from 330 million units in 2013 to 450 million units by 2016, which the x86 architecture ARM will be part of 82% of the total market. Currently, AMD has already started its move with his line Gx -Series APUs, based on a “Jaguar“CPU with a “Sea Islands“GPU, which has stood for rugged performance multi-nucleus /watt. But for 2014, the next step will be to consolidate this market by offering more solutions to suit different needs. 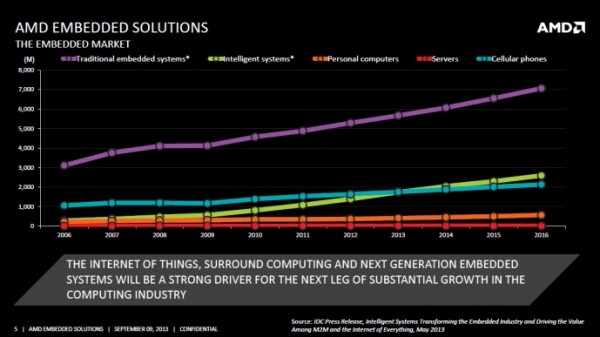 Among the new applications that AMD will have for the embedded market we will find their products will be codenamed “Hierofalcon“, is a family of CPUs based SoC Cortex- A57 design architecture, “Bald Eagle “APUs and CPUs based in the early x86 “Steamroller“, “Steppe Eagle“, an SoC APU design that can be seen as an extension of the current G -Series family, and finally “Adelaar“the first discrete GPU based on AMD GCN architecture.

“AMD is committed to providing embedded community with solutions they require to succeed in the changing market and today it continues to expand at an unprecedented rate.” “There are different needs for different customers in this market segment – from low power to high performance Windows Linux, x86 to ARM – and now with our next product portfolio, we will address them by offering embedded design engineers with respaldas a range of solutions for our embedded integrated program delivery guarantee stability that suits your daily needs.”

“This unprecedented growth of intelligent connected solutions in the coming years will require a lot of solutions to ultra – low-power ultra -high performance of devices connected to the cloud. ” “With the new roadmap, AMD computing leverages both x86 and ARM architectures as graphs to complement the company’s vision of creating a double ecosystem. Combination products currently offer the new roadmap price, performance and consumption choices satisfy the needs of embedding designers. “

“AMD has quickly understood the need to deliver the appropriate SoC for the right task at one of the most comprehensive product portfolios in the industry for the embedded community.” “The addition of devices based on the ARM Cortex -A57 64- bits in embedded roadmap gives designers of high-performance embedded systems a solution that delivers incredible savings in terms of energy and costs. “

AMD “Hierofalcon”: The first CPU based on 64- bit ARM architecture 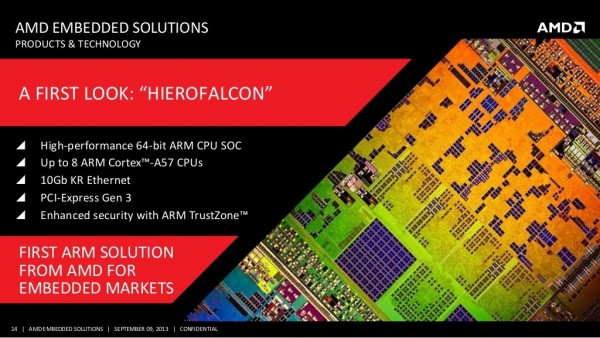 This CPU is designed for embedded applications such as data centers, communications infrastructure and industrial solutions. Will be presented with up to eight cores CPU Cortex- A57 will work to 2.0GHz, will feature supports two DDR3 memory channels / 4 of 64 – bit error correction ( ECC ). Since we are talking of a SoC design, will integrate a 10Gb Ethernet controller KR and PCIe 3.0 support. They will also have security technologies such as ARM TrustZone well as a co – processor dedicated to cryptographic security. Its production will begin in the second half of 2014. 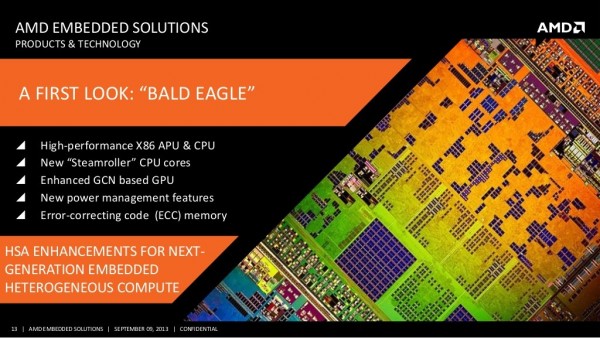 To continue to expand its product offering for x86 embedded market, AMD has prepared the “Bald Eagle “family which will consist of both CPUs as “Steamroller “architecture-based APUs AMD Radeon based GCN architecture, and 35W TDP. The difference is that the CPUs does not come with the IGP enabled. As important features include improvements in HSA architecture for heterogeneous computing. Its greatest use will be focused on digital signage and embedded gaming. In his case will be available for the first half of 2014. 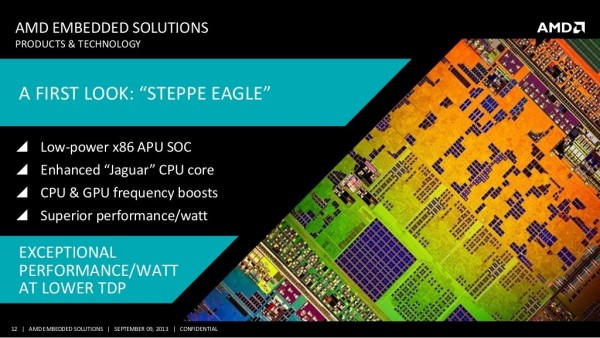 The G -Series APUs are characterized by a design using SoC (System on Chip) combining a “Jaguar”CPU with GCN AMD GPU. In the case of “Steppe Eagle”is an update of low-power embedded products, providing higher performance / watt with lower TDP but often above 2 GHz One of its biggest advantages for designers will be a designed card support for G -Series APUs and software level. They will also be available for the first half of 2014. 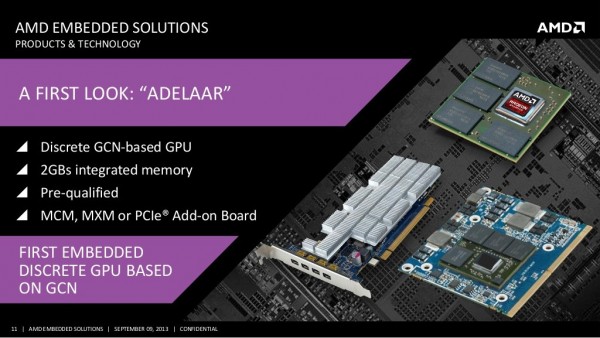 Finally, AMD announces the AMD Embedded GPU based Radeon GCN architecture. Apparently, this looks like an extension to the initiative of AMD thgat recently announced a bundle which includes a discrete GPU with “Trinity”APUs R -Series, only now in different forms for different embedded applications. For example, the “Adelaar”GPUs will be available on MCM modules ( Multi -chip module) with 2GB of RAM. There is talk that offer performance for 3D graphics applications, multi screen, as DirectX11.1 sopot to APIs, OpenGL 4.2, and operating systems such as Windows and Linux. Its launch is scheduled for the first half of 2014, and are also found in MXM modules and PC Cards.

In our view, AMD plans for the embedded market has a lot to do with the lack of AMD growth in its other businesses. In the video card market is doing remarkably well, but you can not say the same for its business PCs CPU that is increasingly limited to the low-end segment, and that mobile is weak. The same could be said of Intel, that suddenly has turned its attention to this market that has always been there, but it has not been until now that has become relevant to its business plan.

All these events can be very handy to what is becoming a fragmented PC market and the lack of definition is in tablets. In the end, who will be dominating and who has more resources will decide the victor.